The Tories have no concept of the daily struggles of working families, who now make up over 60% of Britain’s poor 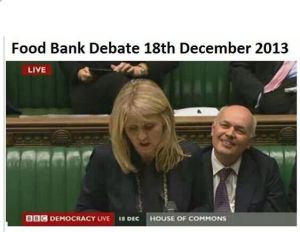 Along with the local Labour Party I wish all Wyre Forest Residents a Happy New Year.  I hope that 2014 will see a change in fortunes for many Wyre Forest people who have lost jobs and endured hardships such as the Bedroom Tax, lost jobs, benefit cuts, increased poverty and especially for those who have had to visit the local foodbank.

I am very touched of the work which is done by the foodbanks in this area. The Kidderminster foodbank announced on December 2nd that they had collected a total of 1.7 tonnes of food. A great tribute to the generosity of Wyre Forest Residents. The Kidderminster food bank announced in recent months that it had fed its 1,000th child. The Trussell Trust recently revealed that more than 500,000 people nationwide had been provided with emergency food.

On Thursday 19th December,Parliament debated an opposition motion on foodbanks. It was good to see that Mark Garnier, our current Tory MP, attended this very important debate. However, it was sad to see that he only managed to be there for a paltry 10 minutes out of three hours. Many other Tory MPs including those from neighbouring constituencies, such as James Norris of Halesowen and Rowley Regis, stayed for the whole debate, or for long periods. What a pity that Mr. Garnier could only afford his constituency food bank user 10 minutes of his valuable time, and then couldn’t be bothered to speak to pay tribute to the Kidderminster food bank volunteers. He seemed to sit very comfortably among Tory MP’s who laughed and barracked during the debate in order to disrupt it.

DWP minister Ian Duncan Smith skulked behind Minister of State of Employment, Esther McVey who made some chilling and purile comments on food banks. Labour’s Gerald Kaufman described her statement as the “nastiest words I have heard in 43 years in Parliament”. This all goes to show that the Tories have no concept of the daily struggles of working families, who now make up over 60% of Britain’s poor.

Labour will abolish the Bedroom Tax, introduce fairer taxation and make growth and jobs which pay a living wage for families our priority. I urge everyone to join Labour’s campaigns in support of working families and to support the food bank.