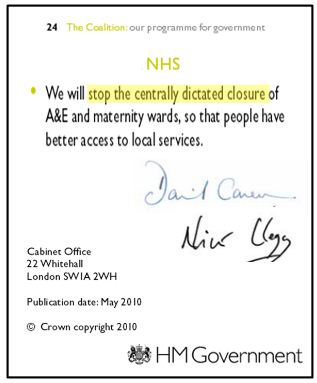 The NHS trusts most at risk from the Health Secretary’s new “hospital closure clause” are today named for the first time. New analysis by Labour reveals there are 32 communities in England where NHS regulators have significant concerns over finances, which risk placing the trusts at the centre of area-wide reconfigurations that affect neighbouring hospitals.

In voting for sweeping new powers today (Tuesday 11th March 2014), Ministers will get the green light to impose downgrades on hospitals in neighbouring areas whilst local patients and clinicians would have little chance to object.

Labour made a direct appeal to MPs in the areas most affected to join a growing cross-party campaign against the Health Secretary’s power-grab. Labour candidates in those communities have written to Tory and Lib Dem MPs urging them to stand up for worried patients and their local NHS.

Labour will vote to delete the new rules from the Bill and will join forces with MPs of other parties to hand power back to local communities.

The debate comes after Jeremy Hunt’s plan to balance the books in a neighbouring trust by downgrading Lewisham Hospital was thrown out by the High Court. His response to that defeat was to bring forward rushed amendments to the Care Bill to give himself the powers denied to him by the court.

“I was horrified to see Worcestershire Acute Hospitals NHS Trust (which covers Wyre Forest) amongst the NHS Trusts at risk. That is why I have made a direct plea to local Tory MP, Mark Garnier, to ‘put constituency before party’ and block Health Secretary’s plans to cut local people out of decisions.

The Lewisham case shows no community in England is safe from being cut out of decisions to close or downgrade hospitals if Hunt’s plans go through. I know how precious Kidderminster hospital is to the people of the Wyre Forest. I am calling on Mark Garnier to act to protect it.”

“This Government used to say it wanted to put patients and doctors in charge of the local NHS. Now Jeremy Hunt wants to ride roughshod over local communities and have carte blanche to break up the NHS without anyone else having a say. He must be stopped.

“With more and more hospitals in financial difficulty, this move could hit every community in the land and leave them voiceless in the face of changes to their services.

“Labour is clear: changes to hospitals should be driven by clinical, not financial, reasons with local people involved every step of the way. That is why we believe these plans are dangerous and wrong. It is time for Parliament to stop an arrogant Secretary of State from overstepping the mark.”

1.   Trusts forecasting ending 2013/14 in deficit and where the NHS Trust Development Authority has required action:

3.   Trusts where Monitor is taking enforcement action and believes there is a significant or material risk over continuity of services: