It’s our NHS – Worcestershire in London

A fantastic day in London on Saturday 4th March with 350 people from Worcestershire showing their support for our NHS.

Coaches left at 7:00am in the morning, including from Wyre Forest, and being filled with Labour Party members, people from all walks of life, including those not allied to any campaign group or political party. Many were on their first demo, or first one in decades, to prove the strength of feeling people have to save our NHS. 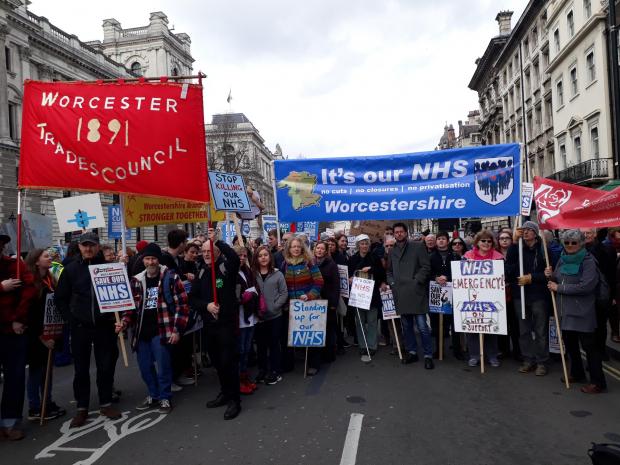 We joined 250,000 others to march in London making a big noise as we went along culminating in the rally at Parliament Square addressed by Labour Leader Jeremy Corbyn, and to rapturous applause from all there.

The fight to save our NHS is on, so the Government better be prepared to listen and fund the NHS properly, as well as Social Care, or they are going to find the next 3 years very hard going indeed.

Stephen Brown, of Wyre Forest Labour said “it was a long day but well worth it, people were up at 6am in the morning and many didn’t get back until 10pm feeling weary but elated about what we’d achieved. This is the start of something big. This is the start of people taking back control of the political agenda from the austerity loving London elite and demanding our health service back. It won’t stop there; eyes and ears are now being opened up all over the country to the possibility that things can be done differently. Austerity is not a necessity but the political choice of the Parliamentary Tory party and their crony councillors in councils all over the country as they’ve slashed one public service after another. Well it starts to stop here. People are beginning to feel empowered again. Like Churchill famously once said “Now this is not the end. It is not even the beginning of the end. But it is, perhaps, the end of the beginning”. Yes, we have a long way to go but come the next General Election we’ll be ready. We are going to make every day between now and then an absolute stinker for the austerity loving Tories and Westminster elite. Our NHS is the biggest thing the people have and they will fight to protect it. It was created after World War 2 for a reason, and nobody wants to go back to a pre-NHS age when only the wealthy could afford healthcare. And mark my words, that is what the Tories have always wanted to do. Every single one of their actions since 2010 has been about downgrading, eroding, underfunding, selling off and privatising the NHS. Well no more. The people are back, aware of what’s going on, and now up for the fight to stop it once and for all”.

Thousands march in protest over plans for ‘unprecedented’ NHS cuts