The Labour Party has announced that Dr Matt Lamb will be its parliamentary candidate for Wyre Forest for the 2017 General Election on the 8th June.

Matt stood for Labour at the 2015 General Election and increased Labour’s vote and took the party into second place.

Dr Matt Lamb was raised and educated in Wyre Forest and lived in Kidderminster for more than 17 years. He was educated at Comberton Middle, King Charles and Kidderminster College. Following in the footsteps of his dad who taught at Bewdley High School, Matt has worked in education for the last 20 years and is currently Assistant Principal at Sandwell College. His partner, Zoe is from Stourport and Matt has a 15 year old daughter, Angel. 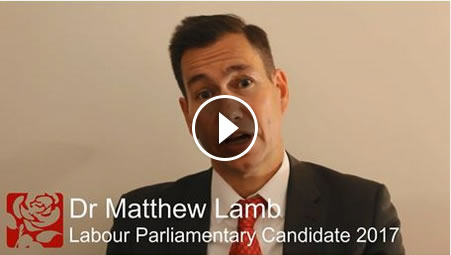 “As a councillor I know that Wyre Forest needs a strong, independent voice to stand up for local interests. In this constituency this election will be a clear choice between a Labour Party who will stand up for Wyre Forest and a Tory Party who are failing working people here. There is an alternative.

The Tories have failed on the NHS and social care. A deepening crisis in the NHS has impacted on local patients with some of the longest waiting times in the country. Labour will give the NHS the money it needs and NHS workers the money they deserve.

Wyre Forest deserves better. Vote Labour on June 8th for a better Britain which serves the interests of the many not the privileged few.”