Conference improved democracy in the Party. The National Executive Committee (NEC) will increase from 24 to 28 members with 3 new constituency party representatives and one trade union member. For leadership elections, it’s now a 10% support threshold in the Parliamentary Party not 15%.

The big news is renationalisation of water, energy, rail and Royal Nail. A National Transformation Fund, Regional Development Banks, support for transport infrastructure projects, more worker and trade union rights, end the pay cap, supporting co-operatives, an end to PFI projects -; all designed to boost the economy and give workers and voters a bigger say. WASPI women to get pensions 2 years earlier with maximum pension age at 66.

Labour pledges a transition period with access to single market and customs union, thereafter a progressive partnership with EU including single market. Guaranteed rights for EU citizens to live and work in UK.

Floor speakers from the constituencies and trade unions dominated the early part of conference, speaking on topics ranging from transport issues through housing to local government.  Andrew Gwynne, Shadow Local Government Minister, followed this up by pledging that we will rebuild local services, ending private provision and bringing all services back into full democratic control by elected Councils who will pay fair wages to all employees.

Speeches by Carwyn Jones, Ian McNichol and Ian Lavery all highlighted the successes at the last election with Carwyn highlighting the abolition of the Trade Union Act in Wales and the return of free collective bargaining.

Conference moved into full throttle with a speech by Emily Thornberry who began by describing Theresa May’s relationship with Trump as “supine, sycophantic and spineless”. She then went on to say that Labour will reform arms export decisions by removing the current secrecy and replacing it with transparency and full parliamentary scrutiny. Emily is a powerful speaker and commands respect from all quarters.

Keir Starmer then grasped the Brexit nettle by firstly spelling out Labour’s guiding values of internationalism, co-operation and equality with social justice. There will be a transition period with full access to customs union and single market followed by a progressive partnership with the EU. Keir stressed that failure in the negotiations is not in the interests of working people and also stressed the need for a pragmatic approach rather than the “post imperial delusions” of the Tories.

The pace quickened with speeches on the economy from Len McCluskey (Unite), Dave Ward (CWU) and Dave Prentis (Unison) but the floor was stolen by a floor speaker from Bolsover CLP. Dennis Skinner brought the house down by stressing that investment should be funded by borrowing. As a warm-up act for John McDonnel it was perfect!

John wants us to “set the agenda for the next generation” with a programme of changes. Investment in transport in the North, Midlands Connect, HS2 to Scotland, rail electrification to Cornwall, de-carbonise the economy with publicly owned suppliers using eco-friendly generation, Swansea tidal barrier, expansion of worker control and the co-operative sector, nationalisation of water, energy, rail and mail, restoration of free collective bargaining, the scrapping of tuition fees as education is a “gift from one generation to the next, not a commodity to be bought and sold”, and finally the ending of all PFI contracts, existing and new.

Wow, follow that! Well, Debbie Abrahams(Work and Pensions) did so saying that WASPI women will get their pensions 2 years earlier and that the top pension age for all will be 66. Then Sadiq Kahn spoke with great dignity about events in London which have so shocked us all, Grenfell Tower and terrorist incidents.

Voting is an important part of the delegates job. Some votes are declared from the Chair by a simple show of hands. Closer decisions are made by seeing votes from CLP delegates first and then union delegates second. When this fails to produce a clear decision a card vote is held. All three methods were used and card votes for constitutional changes are mandatory.

It was agreed to increase the size of NEC from 24 to 28 members with 3 new CLP members and 1 additional union member. Leadership vacancy nominations must receive 10% support of PLP and EPLP(down from 15%). Members should behave with integrity. There was strong support for tightening up rules on discriminatory behaviour which especially gained the approval of Jewish sections of the party.  This section of conference dealing with rule changes was lengthy and time slipped away. However, two major contributions came from Rebecca Long Bailey and Angela Rayner who are rising stars in our party.

Rebecca told us that 60% of energy will come from low carbon and renewables by 2030 and that Labour has commissioned a report on Alternative Models of Ownership. Angela stated that £437m has been snatched from the SureStart programme since 2012. We will invest £500m in SureStart and there will be a new Early Years Programme. Angela then launched a whole series of initiatives to include £10m to end “period poverty” in schools, £8 billion for  new school building, £13 billion for repair of existing schools, £1 billion into F.E., a National Education Service offering free education for all from cradle to grave and finally, at last, full democratic control of schools and colleges!

Could conference get any better? Yes!

Jonathan Ashworth spoke with great passion about health and social care. He pledged an extra £45 billion for NHS and Social Care and £0.5 billion for emergency winter fuel payments. He told us how ambulance services in Sussex have been taken over by a company who own no ambulances! Instead, they sub-contract out to over 80 other companies to provide vehicles. This will end. Labour will end marketisation and private company involvement in the NHS. We will focus on child poverty and childrens’ health. There will be more Health Visitors, more School Nurses, more money for Child Mental health Services, and more support for children of alcoholic and drug abusing parents.

Conference has a great Fringe. I attended a reception for West Midland delegates, a seminar on Socialism and Hope, a discussion with Labour for a Republic, a book signing of Citizen Clem,a “fireside chat” between Keir Starmer and the Editor of Sky News and a discussion on West Midlands Future. All stimulating in different ways, and so to..

What an occasion. Atmosphere electric. Comradely. Expectant. Enter Jeremy to minutes of prolonged applause from delegates on their feet. Chanting of Jeremy’s name.  Labour has changed!

What did he tell us? 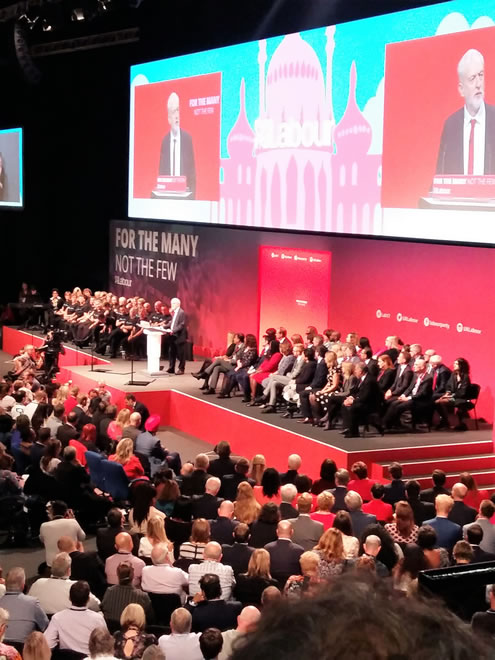 The nasty side of the Tories was highlighted, especially the “misogynistic and racist abuse” suffered by Diane Abbott.
Jeremy said that Labour has accepted the Brexit referendum result and he re-iterated our commitment to EU citizens living and working in UK. We will not allow a low-wage, low working conditions, low employment rights economy to result from Tory negotiations. Instead we will press for jobs first with unimpeded access to the single market and a co-operative relationship with EU.

Jeremy criticised the Thatcherite economic model of the Tories through the example of the water industry. Of 9 companies, 6 are owned by private equity or foreign wealth funds. Profits are shared out between shareholders and exported abroad. So, we will bring the utilities back into public ownership.

Labour will control rents. We will stop cuts to social security. Labour will regenerate housing for the benefit of the residents. Public sector pay cap will be scrapped. Organ transplant law will be changed to an opt-out system. We will bring in regional development banks, National Transformation Fund and a National Education Service for lifelong learning.

The speech emphasised the need for a change in the way we all think. An end to the “me, now” society and the development of a new, kinder, community-based way of life in which everyone is valued and where everyone has a stake. Jeremy is a gracious man who respects all and does not accept the unpleasant, slanderous ways of our political opponents.

Well, that is Conference! Vibrant, comradely, positive, co-operative, forward-looking. Last year, we were a party finding its feet and developing some rising stars. Now, we are a party ready for government with a talented and forceful Shadow Cabinet who are itching to get on with the job.

Can I thank Wyre Forest CLP for allowing me the honour to be their delegate and I trust that I voted as you would wish. It has been a privilege to attend such a stimulating event. The cause of Labour continues to be the hope of the world and the salvation of our people.

Conference ended with a rousing rendition of the Red Flag. Let us keep the Red Flag flying here in Wyre Forest.