It is with great sadness that Wyre Forest Labour Party reports the passing of our sister Patricia Palmer, quietly, in hospital, on 26 January 2018, approaching the age of 87.

Patricia was a stalwart of the Party. She served as a Bewdley Town Councillor for 16 years alongside her husband Frank. She was the first Mayor in Bewdley to be elected from the Labour Party, which was a remarkable feat at the time because Labour was a minority group on the Council.

Whilst a Councillor, Patricia also served as an Officer of the National Association of Local Councils, which is an important body for councils as they work to support, promote and improve them.

Patricia proudly received a National Merit Award in 2016, which was presented to her at the Labour Party Conference in Liverpool by the Party Leader, Jeremy Corbyn. The Party, her friends, and colleagues, have a lovely photograph of the occasion which will live long in our memories. What will also live long in the memory is the address she gave to Conference, because Patricia relished the opportunity to speak at such important events and rarely passed up such a chance. 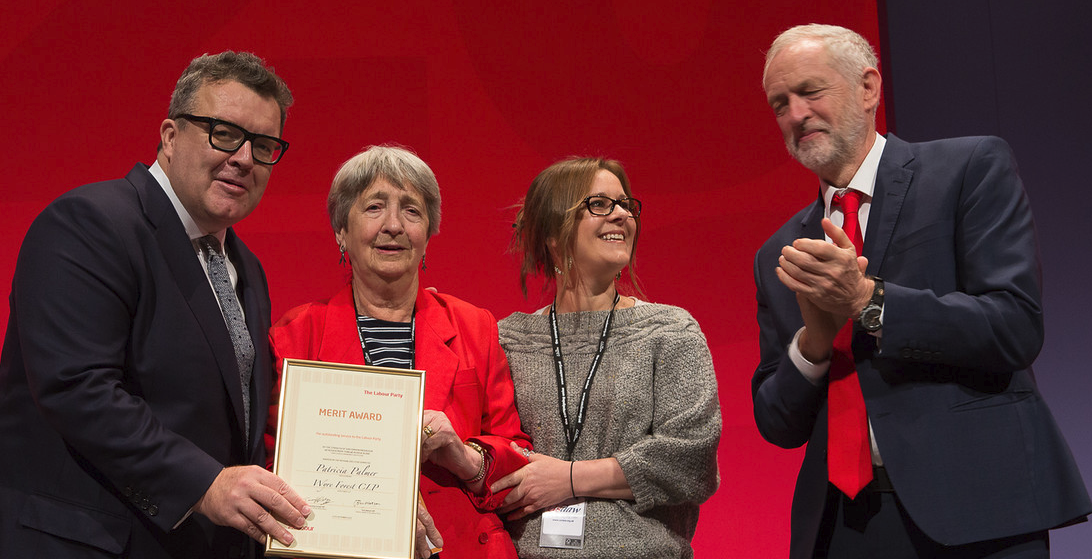 Writing leaflets can be a challenging task and Patricia used her language skills to compose, edit and proof-read Bewdley Branch leaflets over many years. A stickler for correct use of grammar, Patricia never let a leaflet or newsletter be printed if it did not meet her exacting standards. So they were always right, and always accurate.

Typically, Patricia would also challenge her fellow Town Councillors, of all parties, to correct their inappropriate use of the English language. Patricia was fluent in French, having spent several years, as a young woman, on her own in very different times, and so ‘bravely’ working in France you might say. When she returned home she went to work in Leeds as an Editor on the Yorkshire Post.

A great walker, Patricia covered thousands of miles, walking alongside her husband Frank. The Coast to Coast Path, The Pennine Way, long distance paths in Europe were all covered by them both, carrying backpacks and frequently doing what she liked to refer to as ‘wild camping’.

Stephen Brown, Labour Media Officer said “I can speak for everyone in Wyre Forest Labour when I say her colleagues in the Party will all miss Patricia deeply. Our sincere condolences go out to her family and friends at this time of their loss. Patricia has made a massive contribution to the local Labour Party and community she served, and so we are very grateful to her for her contribution to both. However, we will also celebrate her life, a life she lived to the full. Patricia will be fondly remembered as the well respected hard working Comrade she was, an activist who had a big influence in our great family that we call the Labour Movement.”