Brian Seymour-Smith, the Labour Party Candidate for Foley Park and Hoobrook, is calling on Worcestershire County Council to urgently make safe and clear the main footpath which runs alongside and up to the Severn Valley Railway Bridge on the busy main A442 Worcester Road leading into Kidderminster. 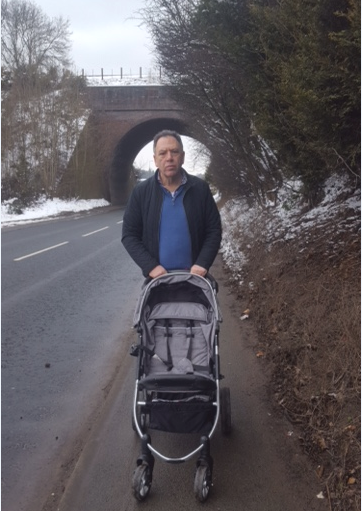 Brian wants action taken before someone is very seriously injured or killed by the heavy passing traffic which constantly uses the main road.

For several years, residents who use this pavement on a regular basis, have been warning the council about the dangers the footpath poses, asking them to do something about it.

The Worcester Road is an extremely busy road. The A442 dual-carriageway narrows as it meets the Severn Valley Railway Bridge. This means traffic, in particular heavy lorries, are then suddenly forced into an almost bottleneck situation. This forces the vehicles and particularly those drivers who do not know the road, to sometimes mount the pavement in order to avoid a vehicle collision. For any pedestrians walking on the footpath at the very narrowest point, this leaves them vulnerable to a potentially life-threatening situation, especially the elderly and parents pushing baby buggies.

As Brian explains, “The problem has come about because over long period of time, earth has eroded from the embankment overlooking the pavement. Foliage has grown up from the spillage, narrowing the footpath. Because no proper action has been taken to remove this overspill, it means the footpath has become extremely narrow at one very dangerous pointwhich is no more than a baby buggy wide”.

He adds, “Local residents have been telling me they want the following to happen:

Brian concluded, “I understand the local Tory MP and local Tory councillors have in the past been approached to resolve this matter. An inspector came from the council to investigate the situation, but nothing more was done. Therefore, I am launching this campaign so that I can support local residents and send a clear message to Worcestershire County Council to take urgent action before someone is killed or seriously injured.”

Stephen Brown, Wyre Forest Labour Press Officer added “Brian is to be congratulated for raising this issue and highlighting Tory inaction on it despite repeated requests to local Tory Councillors and even the MP. Wyre Forest Labour are right behind Brian and calling for urgent action on this dangerous road. What are the council going to do? Wait until someone is seriously injured or killed before bothering to do anything? Local residents, and incidentally drivers using the road, deserve a better response from the Tory County Council. Those senior Wyre Forest Tory Councillors in influential County positions need to start earning their money and step off their gravy train and support the local residents they were elected to serve.”